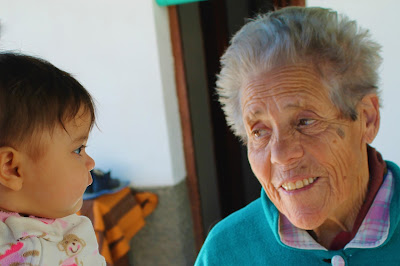 "After your parents go, what's left?" Adrián asked me an hour into our four-hour trek down the Autovía del Este, the Madrid-Alicante freeway.  Clara and Olivia were soundly asleep in the back of the Citroen Berlingo we rented at Barajas, in the carseats we'd lugged from Los Angeles.  "I mean, it's really just sitting around, waiting for your siblings', for your own death."

It wasn't just the rain or the hours-long flat, dull landscape of La Mancha we were passing through that was making us melancholy.  Adrián's stepmother, Cati, had been admitted to the hospital in Elche with a massive recurrence of the colon cancer she'd battled into remission a decade earlier.  We had planned the trip as a vacation, just three months after visiting Spain over New Year's, because her health was clearly failing and we wanted her to see the girls as many times as possible while she still was able.  We just didn't expect her to fail so quickly.

I had an easier time understanding the Catalan that flows when Adrián's family gets together than making sense of her thick Andalúz accent.  The first time I met her she was in bed, flat on her back in the little house she had shared with Adrián's dad for 25 years, as the surrounding orchards turned into industrial parks.  "Everything always happens to her!" Adrián told me.  "She's used up six of her seven lives.  I told him cats have nine lives in the States.  "That's because Americans love excess," he explained.

Like Adrián's dad, Cati grew up during the Spanish Civil War and posguerra, the grim period of poverty and oppression that followed.  She never learned to read, since education was a luxury not available to most families in rural Andalucía of the time.  Instead, she went to work at 14 making rubber shoe soles.  She broke her back throwing herself out a window during a factory fire.  But that factory was how she supported her family when she was widowed in her twenties, with a one-year-old and two newborn twin daughters.

In fact, the first time I met Cati she was flat on her back.  It was my first trip to Spain with Adrián, and we were heading to the village of Zarra in the mountains outside Valencia for the marriage of Adrián's brother to his Scottish partner.  Marriage for same-sex couples had just been legalized in Spain, and much doubt lingered as to whether Cati's back problems were more than a little dramatized, an excuse to keep his father from having to attend his first gay wedding.

"Ay...ay, Adrián!" she cried from her supine position as Adrián held her hand bedside and I shifted back and forth near the door, "I wanted so badly to go to Angel's... Angel's... thing!"  In the end, though, the two of them made it to the wedding, and I sat next to Cati at the long table set up in the shade for the Spanish guests (the Brits were placed at a second table completely in the sun and we watched as exposed skin gradually reddened in the midday heat).  When calls of "que se besen! Que se besen!" (Kiss!  Kiss!) went up, I explained to Cati that at weddings in the States, you clink your wine glass with a spoon to get the newlyweds to kiss.  I then tried it with the plastic glass and spoon with which Angel and Keith had set the tables (a very informal and fun barbecue).  "No funciona aquí," I  told her.  She guffawed, slapped me in the back and said something in her Andalúz accent that I pretended to understand.

But it was true; everything did happen to her -- and sometimes we had to bite our tongues not to laugh, like the time she slipped and fell at a butcher's shop entwining herself in the long string of sausages she had just bought.  "She's like an Almodóvar character!" Adrián marveled, the quintessential Spanish housewife. But like so many others of her era, she raised her family with large amounts of love, grit and dignity.

She faced her illness the same way, working to keep her house scrubbed and her family fed while not letting anyone know that her cancer had reappeared with a vengeance. She went into the hospital the day we arrived in Alicante and died two days after her operation. She was buried the day before we were scheduled to fly back to LA.
Posted by Jason and Adrián at 9:13 PM